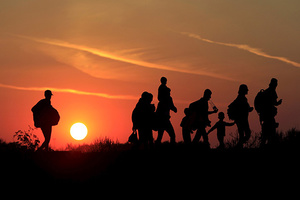 Some 1.3 billion people around the globe don’t have access to an electric grid. But solar startup companies say harnessing an abundant resource -- the sun -- can light up some of the world’s most remote areas. In this Kenyan village, rooftop panels are becoming a cheap and promising source of light.

A young fellow from a small village in Kenya, Mulili used to pay about a $1.50 a day for kerosene, a fuel still used by his neighbors here in Central Kenya and some 1.3 billion people around the globe who don’t have any access to grid electricity.
A number of companies have taken advantage of improved technology and falling prices of panels to deliver cleaner solar power.
Jesse Moore is one of the co-founders of M-KOPA, a leading for-profit start-up in Kenya.
The setup of the system is simple. Customers place a single panel on their roof. Wires connect it to a battery, which powers three light bulbs, a phone charging station, and a radio. A more powerful panel and television come in an upgrade package.
A 24-hour call center at the company’s headquarters trouble-shoots problems.
Sales have also increased exponentially.
But it’s not just the cheaper solar technology that has made this possible. It’s the transformation in how customers pay for it, through their mobile phone.
Vast swathes of Kenya and sub-Saharan Africa have moved quickly from never being wired to now being connected to the world wirelessly. Barely a decade ago, only one out of 10 Kenyan adults owned a mobile phone. Today, more than eight out of 10 own one.
The new solar companies use a pay-as-you-go model. Customers pay a small amount daily with a popular mobile app called M-Pesa. The solar companies say it’s the same price or even cheaper than kerosene.
A study in Nature Climate Change found that, between now and 2030, one-third of all the gains in energy access could come from off-grid solar systems. And the other two-thirds are going to come from central grid extension. So off-grid solar is still only one part of the solution, not a silver bullet.