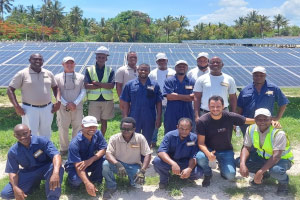 The Mango Tree Beach Hotel Group is now powering 3 of its properties with solar energy in Zanzibar. The 3 solar systems, with a combined capacity of 1 MWp, were installed by the French group CMR.

Mango Tree Beach is banking on solar power to reduce the environmental impact of its properties in the Zanzibar archipelago in Tanzania. The hotel group has just installed solar PV systems in this autonomous territorial unit, located off the Indian Ocean. The largest solar system supplies the Breezes Hotel on the main island of Zanzibar. The installation has a capacity of 400 kWp.

The other solar system, with a capacity of 300 kWp, supplies the Baraza Hotel on the main island of Zanzibar. On the same island, surrounded by the turquoise waters of the Indian Ocean, the French group CMR has also built a small 300 kWp solar power plant that supplies the Palms Hotel.

The electricity produced by these solar systems supplements the energy supplied by the local grid. CMR Groupâ€™s overall contract for this project was to install the clean energy generation systems while ensuring that the facilities were built â€œin compliance with the local grid code, existing local regulations, and in accordance with international best practices and standards,â€ says the Marseille, France-based Company.

To date, this is the largest successfully completed solar project in Zanzibar. But the autonomous regionâ€™s authorities are planning to build a utility-scale solar power plant as part of the Zanzibar Energy Sector Transformation and Access Project (ZESTA). The 18 MWp facility will be built in the Makunduchi area, southeast of the main island of Unguja. The project is supported by the World Bank, through its subsidiary, the International Development Association (IDA).