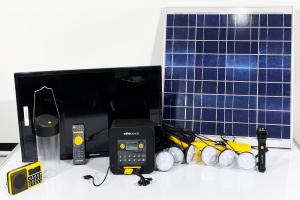 Canadian company Solar Panda is securing USD 8 million for its expansion in Kenya. The funds were raised in a Series A round involving the European Union (EU)-funded Electrification Finance Initiative (EDFI ElectriFI) and Oikocredit, an impact investor based in Utrecht, Netherlands.

The Electrification Finance Initiative (EDFI ElectriFI) supports rural electrification in Kenya. In a series a funding round, the European Union (EU) funded programme has partnered with Dutch impact investor Oikocredit to invest USD 8 million in Solar Panda. The Canadian company is using the pay-as-you-go model to spread its electricity access solutions in Kenya.

The company installs solar home systems that are now making a significant contribution to rural household electrification in sub-Saharan Africa. â€œWe are extremely pleased to become a shareholder in Solar Panda. The company has shown impressive growth over the past few years and has demonstrated strong resilience in the Covid environment,â€ said Lionel Dieu, ElectriFIâ€™s Head of Investments at EDFI Management Company.

â€œThrough this co-investment with Oikocredit, we want to support the company in its next stage of development. This includes reaching a growing number of households without access to electricity in underserved counties in Kenya,â€ adds Lionel Dieu. In particular, Solar Panda intends to accelerate its activities in the northern part of Kenya, which lags behind other parts of Kenya in terms of access to electricity.

The company will rely on more than 1,000 independent sales agents and 300 staff who are deployed to install solar home systems in households. Solar Panda plans to use the funds provided by EDFI and Oikocredit to provide access to electricity to 100,000 households by installing solar home systems with a combined capacity of 8.4 MW, mainly in northern and north-eastern Kenya. According to EDFI, its clean electricity systems are expected to avoid 400,000 tonnes of carbon dioxide equivalent.