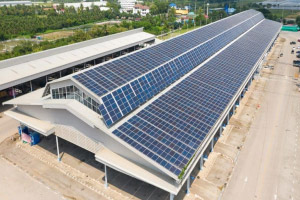 Good news for Distributed Power Africa (DPA) in Kenya. The Cassava Technologies subsidiary has a US$2.7 million line of credit from ElectricitÃ© de France (EDF) and Mirova SunFunder, an investment company based in Nairobi, Kenya. With this financing, DPA plans to accelerate the development of its project portfolio. In Kenya and other African countries, the company, led by Norman Moyo, finances, builds and operates solar PV plants for commercial and industrial (C&I) customers.

Mirova SunFunder contributed to the credit facility through its Solar Energy Transformation (SET) fund. â€œWith this funding, we will see a remarkable uptake of renewable energy and an increase in business efficiency in Kenya,â€ says Norman Moyo.

Specifically, DPA expects to be able to develop 3 MW of installed solar capacity in Kenya with the credit facility. The company is also active in South Africa, Zimbabwe, Ivory Coast, the Democratic Republic of Congo (DRC), and even Burundi where DPA has installed a 104 kWp solar PV plant to power the Econet Leo data centre in Bujumbura.