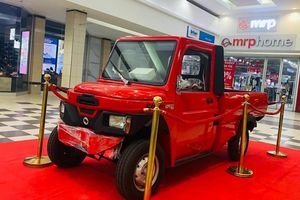 Kipanya, who is known for his sarcastic cartoons, claimed the electric automobile was his own innovative concept that he worked on for 11 months.

Kaypee Motor is the brand name of the ecologically friendly electric automobile. According to Mr Kipanya, it is composed of local materials and takes six hours of charging to travel 50 to 60 kilometres.

"This is a very powerful automobile that comes with its own charger," Kipanya remarked at the Dar es Salaam Serena Hotel's unveiling, which was attended by some of Tanzania's top business leaders.

Kipanya stated that while developing the vehicle required him to delve deep into his money, he hopes to offer it at a lower price so that porters and distributors can afford it. He stated that the pricing will begin at 8 million Tanzanian shillings ($3,400).

He explained that the idea for creating an ecologically friendly automobile occurred to him nine years ago.