Construction of longest bridge in Tanzania on track 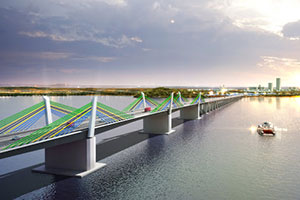 Construction works on the longest bridge in Tanzania is on track. The countryâ€™s President Samia Suluhu inspected the works and confirmed the project stands at 27% complete.

The bridge plan dates back to 1977 but failed to pick through because donors refused to finance its construction. Geita Regional Commissioner, Robert Gabriel acknowledged that construction of the bridge was a dream of the father of the nation, the late Julius Nyerere.

The 3.2-kilometre bridge on Lake Victoria will connect Kigongo and Busisi areas in Mwanza region.  The bridge will be connected to a 34-kilometre road, with 28.4 metres wide from Mwanza. This will result to Mwanza city being a commercial hub in the Lake zone.

Works, Transport and Communications Minister Engineer Isack Kamwelwe said the bridge will link Tanzania with neighbouring Uganda, Burundi and Rwanda, accelerating trade and boosting the regional economy. It will also enable residents to cross the lake in four minutes, contrary to 35 minutes by a ferry.

According to Chief Executive Officer of the Tanzania National Roads Agency (TANROADS), Engineer Patrick Mfugale, the 180-tonne capacity bridge will allow 1600 vehicles to pass at a time. The project is being developed at a cost of US $308m and will be completed in 2023.

â€œThis bridge will reduce transport time and facilitate trade among the East African countries. Currently vehicles spend up to three hours to cross to either side of the Lake by using ferry and about 45 minutes to reach the other side,â€ said Engineer Kamwelwe.