Increasing the logging and export potential of Cameroon 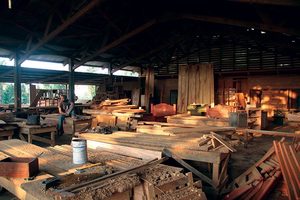 Cameroon is well known for being an international timber exporter, and as Africa's largest exporter of tropical wood to the European Union. However recently domestic timber trade seems to be slowing down. According to Forestry researchers, Cameroon, which boasts of 20 million hectares of forest, which a great portion of the national territory, tends to ignore its domestic timber market and trade in its national forest policies. As a result, the country’s forest is left at the mercy of illegal loggers and traders who on an annual basis record extremely high volumes of trade. But the sector's economic, environmental and social impacts are being evaluated now by government as well as private organizations.

The combined national production would be equal 4.3 million cubic meters per year, if small-scale production of sawn wood market in Cameroon is taken into account. This is nearly double the official figures cited by the government. The situation has become complicated that even the government finds itself making use of illegally sawn wood in the construction of public structures.

To deal with this issue CIFOR has launched a project to sensitize private and public individuals and entities on the need to encourage the use of wood from legally known sources. While launching the project and a workshop in Yaounde, the Central Africa Regional Coordinator of CIFOR, Dr. Richard Eba'a Atyi, said that the phenomenon of illegal timber trade is worrisome, with government also being involved. However this trend is being reversed.

"We have been working with the Ministry of Forestry and Wildlife as well as other partners to reverse the tide. The first driver of the use of legal wood should be the government itself," Dr. Richard Eba'a Atyi said.

The recent campaign falls in line with the Voluntary Partnership Agreement (VPA) of EU's Forest Law Enforcement, Governance and Trade (FLEGT) Action Plan. The Center for Research and Action for Sustainable Development (CERAD) and the Faculty of Agronomy and Agricultural Sciences of the University of Dschang also launched related projects.