Milestone deal between Uganda and Tanzania 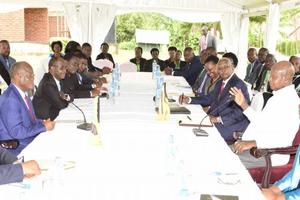 Dar es Salaam — Trade relations between Uganda and Tanzania have reached another significant milestone, this after the former opted to sign a Memorandum of Understanding (MoU) on Railway Transport Services And Cooperation and Improvement of Ports and Inland Waterways.

As per the MoU, Uganda, being one of the East Africa's landlocked countries, will be able to use the port of Dar es Salaam for transporting its cargo. This is a cost effective and efficient method for Uganda to transporting it’s cargo.

The Minister for Transport of Uganda, Mr Bagiire Aggrey explained during the signing ceremony of the MoU, that the decision is in line with their plans to improve business of Ugandans within and outside the country. "We hope that the cost would even go lower after the completion of the Standard Gauge Railway (SGR) project from Dar es Salaam to Mwanza where there is a waterway connection with Uganda," he said.

The government of Uganda in a statement said that it was happy with how Tanzania has improved the Dar es Salaam Port, which provides a good link to other land locked countries.

The option of using the Mombasa port was well considered, which is the shortest route to Uganda with 1,200 km only, compared to 1,800km from Dar es Salaam, but they preferred the latter due to future requirements and overall cost effectiveness.

The cost of transporting coffee by train is $120 (about Sh270,000) per ton with an efficient and effective water transport. With this improvement, the Ugandan government would save $40 million per year. For his part, Tanzanian minister for Works, Transport and Communication Prof Makame Mbarawa promised that his government would keep improving the entire transportation sector with a view to attract more clients from the neighboring landlocked countries. The landmark SGR project is expected to minimize the delivery time of the Ugandan cargo to Kampala, since the cargo will reach at the destination within 24 hours.