Kenyan Community Projects that Save Forests and Livelihoods 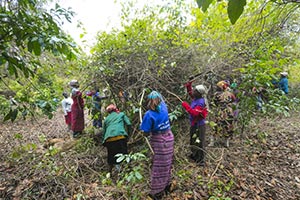 More than 63 percent of people in Africa, according to the Center for International Forestry Research (CIFOR), have no alternative to wood and rely on it as their major energy source. In Africa, almost 90% of the wood harvested is utilised for fuel.

Because cleaner alternatives or sustainable fuels remain out of reach, the International Energy Agency's regional energy forecast cautions that wood fuel will remain vital to Africa's future as the principal energy source.

Sustainable fuel, according to Dr. Julius Ecuru of the International Centre of Insect Physiology and Ecology (ICIPE), is a fuel made from biologically based feedstock such as wood, crops like sorghum and sugar cane, or algae, as well as other agricultural waste.

'We can also utilise this feedstock to make gasoline with the same chemical composition and quality as fossil fuel used in jet engines or planes.' We call it sustainable aviation fuel when it's utilised in jet engines like this. Sustainable cooking fuels may be manufactured or mixed in specific ways for domestic use, but this has yet to gain pace,' he argues.

'In the meanwhile, homes and communities can be encouraged to plant fast-growing or mature trees, such as the Grevilia tree, which has numerous uses, for natural wood or wood fuel. Its regularly clipped branches can be utilised as firewood, for example. It also has excellent soil-conserving qualities.'

The UN's Food and Agriculture Organization (FAO) has discovered that, like the Vanga Forest, the Miombo Woodland, an African dryland forest ecosystem, is vulnerable to overharvesting and livelihood disruption.

In the south-central section of the continent, the forest spans an estimated 2.7 million square kilometers. It is Africa's largest tropical woods, spanning Angola, the Democratic Republic of the Congo, Malawi, Mozambique, Tanzania, Zambia, and Zimbabwe in a vast ecoregion belt.

According to the FAO, the superb ecoregion belt is a vital source of resilience for an estimated 100 million rural poor and 50 million urban residents.

Smallholder agriculture, livestock rearing, charcoal manufacture, and logging, according to experts like Mwangi, are all threats to the forests.

Cleaner options like solar and wind energy are not currently practical, according to the Agency, since most people and governments "cannot afford the price per kilowatt-hour or the enormous cost of the associated infrastructure."

Mwangi encourages people to collaborate with the government to safeguard and maintain forests, noting that the Vanga community, for example, is collaborating with Kenya Forest Services under the Forest Conservation and Management Act of 2016.

The Act encourages community engagement and attempts to prevent future deterioration and, as a result, livelihood devastation.