Hyacinth Power Plant to be constructed by Local Kenyan Firm 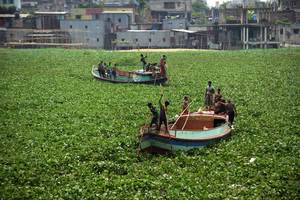 An eight-megawatt power plant is to be built in Homa Bay County by a local firm using water hyacinth from Lake Victoria.

The company Homa Bay Biogas One Ltd is awaiting permission from the Energy Regulatory Commission (ERC) to move forward with the plant. The company hopes to utilize the waterweed that regularly engulfs the lake and use it transform it to biogas.
“Homa Bay Biogas One Ltd will make an application on November 23 for the electric power generation license,” said the firm in a notice published yesterday.
Homa Bay Biogas One Ltd will also sign a deal with Kenya Power to release the additional electricity into the national grid.
The firm will sign a power purchasing agreement with Kenya Power with the aim of offloading the
additional electricity into the national grid.
“The company will undertake the operation of an 8MW biogas power plant at Kobala in Homa Bay County for the generation of electricity by utilizing parasitic water hyacinth overgrowing Lake Victoria.”
This will now to be the newest attempt to counter the problems that water hyacinth poses to small boats and big vessels by covering large portions of the lake.
The invasive weed has cut off large parts of Lake Victoria, which straddles Kenya, Uganda, and Tanzania.
A UK firm, earlier this year announced the closing of a financial deal worth Sh25 billion for a 35MW plant to be set up for the purpose of converting the weeds into biogas. On completion, the plant will be the largest biogas electricity plant in Africa.
Last year, independent power producer Biojoule Kenya signed a power purchase agreement with Kenya Power, allowing the former to offload 2MW into the national grid.
Earlier this year, the firm launched operations on its Gorge Farm Energy Part plant, making it Africa’s first biogas electricity producer to be linked to the national grid.