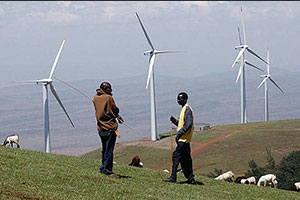 Kenya progresses to make giant strides in its adherence to renewable energy. It has disclosed Africa’s biggest wind power project in a gusty and rocky desert stretch located 600 kilometers (372 miles) north of the capital Nairobi. The Lake Turkana Wind Power farm includes 365 turbines with a capacity to dispense 310 megawatts of reliable, low-cost energy to Kenya’s national grid.
The wind farm is situated in the Turkana Wind Corridor, where powerful winds traveling between Mount Kulal to the north and Mount Nyiru to the south generate ideal wind conditions to make power from wind turbines. The Turkana plant investment was done by a consortium of African and European companies, with Kenya expected to buy power at a constant price over a 20-year period. The project is focused on strengthening Kenya’s electricity supply, taking the country away from the dependence on fossil fuels, and meeting its set goal of 100% green energy use by 2020. Officials also hope scaling renewable investment will lessen the manufacturing production costs and in turn, create multiple job opportunities.
President Uhuru Kenyatta named the wind plant a “monumental feat” and said it signified Kenya’s commitment to pursue clean sources of energy and lower greenhouse gas emissions, during the inauguration. Kenya creates about 70% of its electricity from renewable sources, and the country is among the world’s top most countries in the geothermal sector. Renewable projects like the Garissa solar power and the Ngong wind plant have also raised Kenya’s installed electricity capacity in recent years.
Increasingly, off-grid renewable energy companies like M-Kopa, Azuri, and Mobisol have stepped up with services that can reach rural and urban dwellers where traditional grids have not been continued. These companies mostly offer pay-as-you-go solar power that consumers can buy and manage through their mobile phones.
As the Turkana project was related to the national grid last September, Kenyatta said the plant introduced more than 1.2 billion kilowatt-hours of electricity and saved taxpayers up to 8 billion shillings ($77.5 million) from less usage of diesel-generated thermal power.