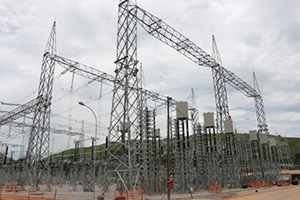 Kenya's ministry of energy and a Chinese firm, China Aerospace Construction Group, have launched the construction of an extensive power transmission project outside the capital, Nairobi.

"The construction of this new facility in Konza indicates our dedication to human life, and commitment to creating tailored solutions that make the greatest difference to our client, Kenya Electricity Transmission Company, as well as the power transmission system in Kenya," said Li.

He said China Aerospace understands that Konza Technopolis is one of Kenya's Vision 2030 flagship projects targeting to transform the country into a Silicon Savannah and that his firm will help in the endeavor.

Li pleased Kenya's ministry of energy, its National Treasury, Sinosure and China Exim Bank for their support and close cooperation.

Zhao Xiyuan, minister counselor at the Chinese Embassy in Kenya, said power is the blood and life for manufacturing, one of the Big Four Agenda advanced by President Uhuru Kenyatta as a priority development task.

"A secured power supply provides the development of manufacturing. Konza Technopolis, the Silicon Savannah planned and marketed by the Kenya government with utmost efforts, will devote tremendously to the country's technological development," he said.

Zhao said China has learned from its development experiences since the establishment of the country 70 years ago that industrialization and technological development are the key to driving a nation to become rich and strong.

"We are delighted that the Kenyatta government is making persistent endeavors to this end," he said. "The Chinese government is dedicated as usual to supporting Kenya in developing technology and realizing industrialization."

"This project will be completed and put into operation at an early date and it will be playing a valuable role in the actualization of the Big Four Agenda and the development of Konza Technopolis," Zhao said.

Charles Keter, cabinet secretary at the Kenyan ministry for energy, noted that reliable power supply is the biggest enabler of the Big Four Agenda.

He thanked China Exim for funding the project and others across the east African nation, saying that Kenya is working toward universal access to electricity.