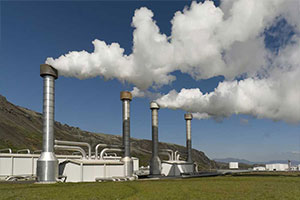 The county of Nakuru in Kenya has been positioning itself as a promising energy hub with various projects initiated by the national government of the country.

Drilling for the Olkaria I Unit 6 project is about 19% complete, according to local county commissioner. The commission of the project is expected after 2021, while KenGen is still targeting an additional 720 MW of geothermal power generation capacity in the medium term.

State-owned Geothermal Development Company has spent about half of allocated funding for the drilling of geothermal wells at Menengai.

"The company began drilling at Menengai site in February 2011 and has so far sunk over 43 wells, 24 of them have been tested giving 165 MW. The rest of the wells are still undergoing tests. (GDC) plans to pump an extra 1065 MW into the national grid in the next 10 years. The power will be produced from Menengai 465Mw, Baringo-Silale 300Mw and 300Mw from South Rift region as the government seeks more geothermal energy" explained the County Commissioner.

Mwenda affirmed that Kenyans were inching closer to getting a relief of lower power bills when three independent power producers (IPPS) cleared by the Geothermal Development Company (GDC) start operations at the Menengai Crater Floor in Nakuru.

The three producers are setting up power plants under a build-own-operate model, giving hope for cheap electrical power in the country. Each is estimated to set up a 35MW modular geothermal power plant in the Menengai Crater field to generate a cumulative of 105 MW.

Mwenda, who spoke at County Commissioner's headquarters in Nakuru, said once completed, Menengai GDC plant would produce enough electricity to serve almost half a million homesteads and 300,000 businesses. With the electricity to be generated by these independent power producers (IPPs), GDC will continue to promote and implement geothermal direct use applications in the region.

"GDC made history with the first ever-pasteurized milk using geothermal energy at Menengai in Nakuru County. Though at a proto-type level, the unit has proved commercial viability. It uses geothermal steam, instead of wood or oil fuel.

A new regional transmission line and substations will link the private driven power plants to the national grid.

The administrator observed that a further Sh.1.4 billion had been pumped into upgrading Olkaria 1, Menengai, Soilo and Olkaria 5 Power Sub-stations, adding that Nakuru was banking on affordable and reliable supply of power to reignite its economy through industrial growth.

In the wake of plans to build an industrial park and a dry port in Naivasha, Nakuru County is now on the brink of experiencing a major flow of new investments following an unprecedented boom in geothermal energy exploration and production.

The administrator conceded that the cost of power has been the biggest challenge facing many investors in various parts of Kenya.

He further stated, "The cost of power consumes over 50 percent of the cost of production, adversely affecting the profit margins of investments. These investments in the sector by the National government will provide an opportunity for investors to access cheaper energy for their investments".