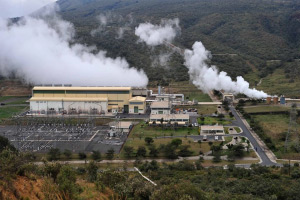 When Kenya opened the Olkaria power plant 4 decades ago, it was seen more as a research project than a commercial venture. The facility is located in Hellâ€™s Gate National Park, a barren zone of volcanic rock that is permeated by sulphurous gases and is mainly populated by warthogs and zebras. The untested and costly geothermal technology was experimental at best, with the 1st unit expected to power around 10,000 homes. Today, Olkaria generates more than 50 times, and the technology is well on its way to becoming the backbone of the countryâ€™s power grid.

For many decades, Kenya and the other surrounding countries have focused on oil-fired thermal power and hydropower plants, but recently they have recognized the true potential of their vast underground energy resources. The Kenya region sits astride the Great Rift Valley, an area where tectonic plates meet and bring the magma in the Earthâ€™s core closer to the surface. Itâ€™s one of the most active volcanic zones in the world â€“ Kilimanjaro lies in its heart â€“ with dozens of hot springs indicating the intense heat just below.

Kenya gets almost half of its electricity from geothermal energy systems, more than any other country, according to researcher Fitch Solutions, and is well on the way to increasing this to almost three-fifths by year 2030.

Olkaria, the continentâ€™s 1st geothermal power plant, is fed by pipes drilled nearly 2 miles into the earthâ€™s crust. These supply high-pressure steam with a temperature of up to 350Â° C, which is used to drive huge turbines. Over the next 5 years, KenGen plans to invest USD 2 billion in 4 new power plants and other modernizations in Olkaria, almost doubling Kenyaâ€™s geothermal capacity to more than 1.6 GW enough to power a city of 1 million people To supply electricity. In the longer term, KenGen predicts, the country has the potential to generate at least 6 times as much.

The biggest difficulty in Kenya and across the region has long been initial investment. The turbines and other above ground equipment add up to about USD 3 million per MW, but the real cost is below the surface. A single well can cost up to USD 6 million, and each unit typically requires multiple attempts to drill to find enough steam to keep the turbines running; for the 1st station in Olkaria, KenGen drilled 33 holes. Geothermal energy â€œwas seen as too risky early on,â€ says Peter Omenda, a consultant who has worked on numerous projects in the region. While advances in technology have brought the price down and made it easier to get more steam from each well.

To offset the costs, Kenya founded the state controlled Geothermal Development Co. in year 2008 to shoulder the investment risks associated with the technology. Similar to oil wildcaters, the GDC drills wells, and when it discovers a field with potential, it sells the steam to KenGen or others who build the above ground infrastructure. GDC has raised USD 746 million, mostly from international lenders like the World Bank, to develop Menengai Crater, a site about 60 miles north of Olkaria where 3 independent power producers are expected to open geothermal plants in year 2023 after years of delays become.

Kenya gets around 12 per cent of its electricity from wind and solar, up from less than 1 per cent 5 years ago. In contrast to these technologies, however, geothermal energy does not require a stiff breeze or sunny skies to ensure a steady flow of energy. And compared to hydropower, which Kenya also relies on to generate 100 per cent renewable energy by year 2030, geothermal systems are not threatened by droughts or warlike neighbours that could interrupt the water supply.

â€œGeothermal energy will give many communities access to electricity at an affordable price.â€