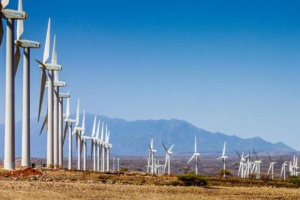 Kenya is among the top 10 countries in the world producing electricity through wind power, thanks to the Lake Turkana Wind Power (LTWP) launched by President Uhuru Kenyatta.

According Emberâ€™s Global Electricity Review 2022, Kenya was ranked 9th biggest producer of wind energy globally and the top in Africa.

This is even as the sector's innovations continue to grow bigger hence producing more green energy while lowering the cost per kilowatt.

The top producer worldwide is Denmark whose wind energy accounts for 48 per cent of the total electricity consumed in the country followed by Uruguay (43%) and Ireland (33%).

Kenya accounts for 16% wind energy of all electricity, placing it a head of 1st world countries such as the United States and Sweden.

"Today, the tallest turbines can reach over 200 meters (650 ft) in height and cost more than Ksh 1.4 billion (USD12 million) to manufacture and install.

"The biggest turbines are all located over water. The so-called offshore turbines can be taller than those onshore, which means they can harness more wind energy and produce more electricity," the review read in part.

LTWP has an installed capacity of 310 MW of clean, reliable, low-cost energy and 365 wind turbines with a capacity of 850kW each.

â€œGlobally, Kenya is celebrated as one of the leading countries in the world with an energy mix dominated with renewable sources, especially from geothermal, a technology in which our country has become a continental centre of excellence.

"It is the biggest wind power in Africa that will generate 310 MW at a low cost. It is part of the plan by the president to hit 100% of clean energy by next year,â€ State House spokesperson, Kanze Dena, stated in 2019.

2 years after construction began, the power plant started feeding electricity to the national electricity grid when it was connected to the power transmission line to join the grid in Suswa, Narok county.