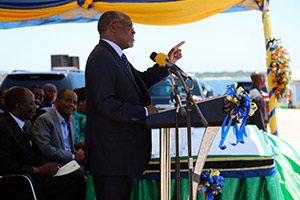 People from Katavi Region are happy on commencement of the construction of Tabora- Katavi power transmission line project for the objective of connecting Katavi to the national power supply system.

The project is expected to cost 135bn/- upon completion, and it will supply 130 megawatts to region whose current consumption of power stands at between 5 and 6 megawatts.

the success stories includes this project by President John Magufuli as it will help save billions of shillings that the fifth phase government has been spending to run power generators.

Speaking after laying the foundation stone for the construction of the power line at Kampuni Village in Mpanda District, Katavi region, President Magufuli said the government through Tanzania Electric Supply Company ( Tanesco) has been spending a whopping 6.5bn/- annually to operate the generators.

Dr Magufuli mentioned that the project, upon completion, will solve frequent power outages as the generated power will surpass their actual consumption of between 5.5 and 6.5 megawatt.

"Once Katavi is connected to the national grid the region can be a part considerably to the national economy as regional residents can start up industries whenever they wish to and the operation costs will also go down," he said.

The President said currently Tanesco collects 1bn/- only annually while it spends 6.5bn/- in operation cost, indicating that the power utility firm has been incurring big loss

The head of State assured Katavi residents and Tanzanians in general that Nyerere Hydropower project, which is currently under implementation, will change Tanzania's supply as it will generate 2,115 megawatts to the national grid.

President Magufuli eleborated that in the past power outages were normal in the country but in recent years the problem been contained after it came to the attention of authorities that some officials were sabotaging power production at Mtera Hydro Power dam by tampering with the water supply system at the reservoir.

He mentioned that earlier the government was subsidising Tanesco by giving it 200bn/- annually to meet its operation costs but currently the government no longer dishes out money and the power utility firm manages everything on its own.

Dr Magufuli also kept the foundation stone for the construction of 35.6-kilometre stretch from Mpanda - Vikonge road in Katavi region.

He clarified that as a feasibility study and detailed design for the remaining 169-kilometre road was complete, responsible authorities should advertise another tender for the remaining 50 kilometres to connect the areas with Uvinza town in Kigoma.

He noted that "This project started in May 2019 and is expected to be completed by May 2020 in which a substation has been constructed and later two machines will be installed with the capacity of 50 megawatts each".