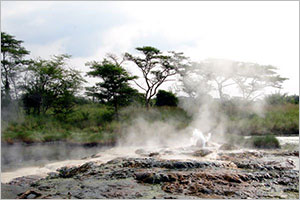 Songwe Region has started Knocking into its abundant economic potentials with the on-going implementation of the Songwe Geothermal Power and Direct Use Project.

The USD 32-million geothermal power project at Majimoto Village in Mbozi District is expected to generate between 5MW and 38MW when completed in the year 2023.

Before the power generation starts in the year 2023, the Tanzania Geothermal Development Corporation has introduced direct use potentials including the geothermal tourism, green house, drying crops, fishing and poultry farming.

â€œI have ordered the Tanzania Rural Road Authority and the project contractor and Tanzania Geothermal Development Corporation to construct a tarmac road from Nanyara Ward, to about 10 kilometres, to the project area,â€ Nicodemus Mwangela told The Citizen.

The region, according to Nicodemus Mwangela, is also conducting awareness campaigns to attract investors and traders from inside and outside the region.

â€œI have been holding meetings with business minded people on the available opportunities. I will also, personally, take some investors to the sites and show them what potentials we have,â€ Nicodemus Mwangela said over the phone.

Mbozi district commissioner John Palingo said his role was to create conducive environment for business and investment that would attract investors and traders as well as awareness creation to residents.

â€œWe are ready for the project and Iâ€™m responsible to publicise it to the resident and the world,â€ John Palingo said.

â€œWe have already hired an Italian consultancy company, ELC Electro consult S.P.A that are charged with managing exploration activities. The companyâ€™s job will be to design a drilling programme, preparing a feasibility studies of roads, water and electricity infrastructure as well as giving specifications of the drilling machines that the government will procure after finding eligible drilling firm,â€ he said.