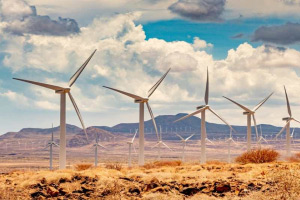 In March 2021, the Lake Turkana Wind Power plantâ€™s consortium announced that it had recorded a â€œgood monthâ€ having achieved an average capacity factor of 75.8 per cent, â€œthe highest in the last 31 months that we have been in operation.â€

Each of the 365 wind turbines has a capacity of 850 kW, and a high voltage substation.

â€œLake Turkana Wind Power is situated in one among the best locations on the whole planet for the onshore wind production. The high wind speeds brought about by the tunnel formed between Mt. Nyiro and Mt. Kulal means that our capacity factor is much higher than the rest of the world. Other factors such as the availability of the resource used for generation, and downtime of components for maintenance, or normal wear and tear leading to breakdown also come into play.â€ said Wellington Otieno.

A higher capacity factor means that the Lake Turkana Wind Power plant is supplying more renewable energy produced from wind to the Kenyan national grid, and reducing the dependence on polluting and expensive diesel power.

The Lake Turkana Wind Power wind farm is connected to the Kenyan national grid through a 435 km associated transmission line. The transmission network was constructed by the Government of Kenya through the Kenya Electricity Transmission Company.