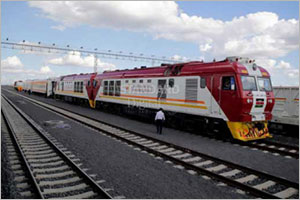 The Tanzania SGR hit a speed of 160Km/h compared to Kenya's SGR that uses diesel and can move up to 120Km/h.

It is being expected that, once commissioned for service, the new SGR train should be able to travel at the velocity of 160 kilometers per hour, which is essentially twice the speed of an ordinary bus.

On Sunday, Tanzania's Chief Government Spokesperson through their official social media shared a short clip of the electric SGR during its first test.

Tanzania is building the new SGR targeting to replace the rather aged and less efficient meter-gauge railway system, established during the colonial East African Railways.

In May, the government said citizens will wait longer to ride on the electric train, thanks to delays in completion of Julius Nyerere Dam that is expected to produce electricity to power locomotive engines on the SGR.

According to officials, the construction schedule of the dam was re-done and the completion date pushed to 2024.

Railway lines will be complemented with overhead powerlines to supply electricity to the trains and wagons.

The project will be developed in five phases starting from Dar es Salaam to Morogoro at 300 kilometers, which is now complete.

From there, the country will embark on the Fourth Phase measuring 130 kilometers to link Tabora with Isaka.

Isaka is going to be the branching point. Here one arm will be extending to Mwanza with an added 249 kilometers in Phase Four to wind up the in-country, Dar to Lake Zone SGR network.

At $1.92 billion, Tanzania appears to have secured the cheapest railway construction deal in the region, given that it will be spending nearly half of what Kenya spent to build the first phase from Mombasa to Nairobi.

Kenya's line between Mombasa and Nairobi, which was slightly longer by about 50 kilometres, was constructed at a cost of $3.8 billion.