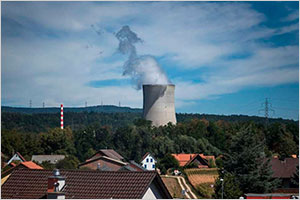 At least seven African countries are at various stages - commissioning, shopping for vendors and mapping appropriate sites - in the roll-out of nuclear power plants, as a majority eye 2030 as a start-date for generating electricity from nuclear energy.

Egypt is currently the only country to have begun construction, following the formal launch of a site in July. The US$25 billion project, being developed by Russian state energy corporation Rosatom, will have total installed capacity of 4.8 gigawatts (GW) made up of four, 1,200 megawatt reactors, when complete.

"Egypt has joined the nuclear club. The plant will be the largest project of the Russian-Egyptian cooperation since the Aswan High Dam. Having its own nuclear energy industry has been a dream for the Egyptian people for more than half-a-century," said Rosatom Director-General Alexey Likhachov, during the launch.

Kenya is also inching closer to the development stage, after identifying two coastal sites - Kilifi and Kwale counties - earlier in the year, to put up the country's first nuclear power generator.

The country's Nuclear Power and Energy Agency (NuPEA) has estimated the project would cost about US$50 million, with construction works planned for 2030, a test run four years later and full operations projected for 2036.

"There is a need to complement the existing renewable energy sources in Kenya to meet the projected energy demand while achieving low carbon development, through alternative low carbon source," said NuPEA Chief Executive Officer, Collins Juma, during the Tenth Review Conference of the Parties to the Treaty on the Non-Proliferation of Nuclear Weapons early August.

Uganda is considering three sites - on the Kyoga, Kagera and Aswa rivers - for the construction of two 1,000 megawatt reactors, by 2031. This follows agreements reached by the country's Ministry of Energy with Russian and Chinese investors.

After a false start, Nigeria is starting all over again. Nigerian Nuclear Regulatory Agency opened bidding for construction of a 4 gigawatt nuclear plant in March, 2022 - and the country is reportedly betting on the four-reactor power plant with an equivalent of a third of the country's total installed capacity, to address power outages.

In 2016, the West African nation reportedly sealed a US$80 billion plan for four nuclear stations with Rosatom but this never materialised.

After the discovery of uranium deposits four years ago, Tanzania is looking to help from Rosatom and its subsidy Uranium One, which has a license to mine uranium in the Mkuju River within the Selous Game Reserve, to build a research reactor and subsequently set up a commercial nuclear plant.

In June, Morocco advanced its plans for nuclear energy after the release of a report that gives its legislators recommendations for making a switch to renewable energy sources.

"Morocco has invested in solar and wind energy, and it is now eyeing nuclear energy to ensure its electricity needs in the futureâ€¦ we now need a national decision to start producing electricity from nuclear energy," Energy Transition and Sustainable Development Minister Leila Benali was quoted as saying, by Moroccan media.

The report follows an almost seven-year feasibility study of for a nuclear reactor and will guide the country's parliament, which is expected to deliberate on it through the year. Morocco is largely an energy imports-reliant country, importing up to 90 percent of its annual energy requirements.

Rwanda is also making significant strides after signing a deal with Rosatom to build a center of nuclear science and technologies, in October 2019.

While other countries are chasing after large projects, Rwanda plans to build two Small Modular Reactor (SMR) units, each with a capacity around 100 megawatts.

A 2022 forum report by the Mo Ibrahim Foundation shows that small modular reactors can be mobilised more quickly and present more short-term opportunities for nuclear power in Africa.

"Large nuclear power plants are subject to cost overruns and construction delays," according to the report titled, The Road to COP27; Making Africa's Case in the Global Climate Debate.

South Africa's Koeberg nuclear power station - owned and operated by state-run power utility Eskom - is the only nuclear power plant on the continent. It has an installed capacity of 1,940 megawatts.

As more countries push on with the switch to low carbon electricity, South Africa has been eyeing an additional 10,000 megawatt in nuclear power capacity. However, there has been widespread opposition by an anti-nuclear lobby.